If you find one of our accommodations offered somewhere else for less, then we will match the price. Terms and conditions Read more

Maps: Surroundings
Click on any of the Places for more information

Travel guide with pictures and reviews for Sierra Nevada

The Sierra Nevada is the most southern ski resort in Europe. The snowy slopes are situated just one hour from the Mediterranean coast. Skiing and snowboarding are the most popular sports here.

Some of the highest peaks of the Spanish peninsula can be found in this Andalusian mountain range - the Mulhacén (3.482 m) and the Veleta (3.392 m).

The natural preserve of Sierra Nevada covers the size of 86.208 hectar of unique landscape. In the summer time, when the temperatures are high, the Sierra provides excellent conditions for hiking or mountainbiking.

At the beginning of the main season (around november/december) when the first snow falls, the looks of this area change completely. Now it's the time for wintersports. Usually, the snow stays until May before it gets too warm again.

Granada is situated below the Sierra Nevada, 65km from the Costa del Sol. With 270.000 inhabitants it is one of the larger cities in Spain. The geografical position, the cultural and historical heritage of Granada make this city one of the worth visiting places in Andalusia

Granada's history characterizes the city, starting with the Romans and later being occupied for 800 years by the Moors.

Sierra Nevada is a ski resort with a special flair offering a great party every night in the skiing season. Many bars and clubs open until the early morning and many tourists may find themselfs the next day with a hang-over in the chair lift.

Granada is another recommendation for night birds. The best bars and places are located in the city center, close to the historical district Albycin below the Alhambra.

Try the typical Andalusian recipes for fresh local fish like the tuna and sword fish, the unbeatable "Jamon" of the black Andalusian pigs or a filet of the best Spanish beef.

We recommend to join the food with a bottle of Rioja and for dessert a glass of sherry from the nearby vineyards around Jerez de la Frontera. 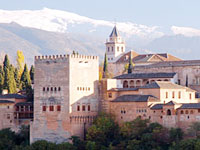 The arabic castle Alhambra is enthroned on the highest point of the city and, walking through the gardens of the Generalife you can enjoy panoramic views of the snow covered mountains of the Sierra Nevada in the background.

The UNESCO has declared the Alhambra as World cultural heritage.

Now you will understand why the Arabic kings chose this place to settle down. Their reign lastet for 800 years and has left very visible marks, which make Granada one of the most interesting cities in Spain today.
.
Day-trips from Sierra Nevada

Sierra Nevada and Granada are perfect bases for many interesting day-trip destinations. These destinations can be visited within one day without causing the so-called "holiday stress".

Here just some recommendations, not more than 2 hours from Granada away:

The most popular sports in Sierra Nevada between November and May are snowboarding and skiing.

Mountainbikers and friends of cross-country skiing will also find perfect conditions and a unique natural experience in the Sierra Nevada.

Not to forget to mention ski touring on one of the highest mountains in Spain, dog sledding in the lower village of Borreguiles, or some ice skating in the upper part of the village Pradollano.

In the summer the Sierra Nevada invites to extended hikes up to 3.400m above sea levels. You can see the coast from here on clear days.

The Sierra Nevada provides best conditions for skiing under the andalusian sun.

The Sol y Nieve Ski Resort in Andalucia (also known as the village of Pradollano) brings you a ski area with more hours of sunshine than any other European Ski Resort.

The majority of the slopes face north east so the snow stays longer providing better conditions throughout the season.

There are now 79 runs covering 87km, an improved snowboard park with half-pipe and areas where you can go off piste skiing, if conditions are apropriate.

Snowboarding is one of the most popular sports in the winter time.

If you coose the Sierra Nevada for your snowboarding holidays, then you get the unique chance to snowboard in the morning above 3000m and go surfing or swimming to the nearby beaches of the Mediterranean Sea in the afternoon.

It takes one hour by car to reach the Costa del Sol.

Snowboarding season in Pradollano, the highest situated village in Spain, is also party season in the bars and clubs.


Usually, there's snow from November til May in Sierra Nevada. The safest months to find good snow are January til April.

If there shouldn't be any natural snow, they run snow canons to provide a minimum of skiable slopes.

The best conditions in the day are before mid day. The snow will be slightly melting, and therefor provides more grip. In the afternoon the snow will be quite soft and slushy, which is great for beginners to learn without hurting themselfs.